from Ashley Imlay at deseret.com

WEST VALLEY CITY — It started after World War II, when a soldier returned home to Utah with $5,000 in his pocket and a passion for hauling produce from one point to another.

Nearly 75 years later, about 4,200 C.R. England trucks travel the U.S. And Gene England, one of the founder’s sons, continues working.

England sat down with the Deseret News in his office inside the company’s West Valley City headquarters recently, just days ahead of his 100th birthday on Thursday.

What has he learned in that century?

“Goodness is the route to happiness,” England says.

Born in Plain City, then a town of 600 people in Weber County, England had been riding along in trucks with his dad since he was so small his legs didn’t touch the floor.

His dad, Chester R. England, “was a guy that was always looking for a way to build something and make something, and trucks were the way to do it. As a result, I was a trucker’s boy,” England recalled.

So was his younger brother, Bill.

“And we loved our dad. He was the kind of a guy that just made you want to be with him. And our happiest days were on those trucks. He wouldn’t take us out of school, but in the summertime and maybe on weekends, we’d get a chance to go somewhere in the truck.”

Later, at Brigham Young University, Gene England met his first wife, June, “a beautiful girl, that we had six children, six boys together.”

June England’s dad was the commander of the National Guard in Spanish Fork, which was called up in 1941 to San Luis Obispo, California. That summer, England and his wife went to visit her family in California, and he ended up taking a job as a manager of a postal exchange for the Army as a civilian.

England was later drafted into the Army upon returning to Utah. He wanted to serve, a desire he believes was “standard.” Out of 600 people in Plain City, about 119 people served, he said.

He ended up in Okinawa, Japan, which he described simply as a “bad place to be.” There, England earned a Bronze Star for going into gunfire on his belly to drag an injured comrade into his foxhole during an operation. Only 25 soldiers out of 126 survived that operation. 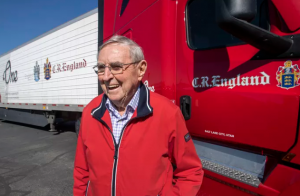 England returned home with $5,000 from selling his cigarette rations and, while he worked for the postal exchange, renting his car out to soldiers on their long weekends off. He, his dad and brother used that money to buy a used Kenworth truck, their first “big truck.”

“Our trucking had been small trucks. Now, we’re getting into the big time. We’re gonna haul the big ones,” England recalled.

That became the beginning of C.R. England.

They started picking up bananas from El Paso, Texas. They later became a carrier for a large Salt Lake firm hauling produce from California, Florida and Louisiana. But then rail services caused rates to drop on potatoes to California, so they needed to find a different route. They decided to go coast to coast, placing their first truck in Boston in 1955.

It was an age where large trucks were fairly novel.

“That truck was one of the joys of the business, because it’s a dandy. It’s fancy.”

Every state had a different weight law, so the Englands bought the lightest trucks they could find to help them haul the heaviest loads possible through states with light weight limits.

Gene England thought of ideas, and his brother Bill supported him. “We were partners, 50%, and we worked together all our lives.”

“Then the same thing started with my family as dad’s family. My boys just loved to be with me, and I loved to be with them. And their mother was, also, she would go with us in the truck whenever possible,” he remembered.

The sons also worked at the truck shop on weekends, washing, greasing trucks and doing other tasks.

“And that’s been the story of the England family.”

But success didn’t come without challenges.

After the Interstate Commerce Commission was formed to regulate transportation of goods, the Englands were restricted to hauling what their dad had started hauling, produce instead of manufactured goods.

“We were the guys that were the nothings. We got what was left. Produce, fishery products, poultry products,” England remembered.

But fortunately, in 1980, the government deregulated the industry. C.R. England could finally apply to carry anything. “And all us exempt commodity carriers were hungry. And we were there. We grew, and we became the largest refrigerated carrier in the country.”

“As I reflect back over all those years, it’s been a very happy memory. And we had so many people who have served us, even families that have worked for us so many years. And that’s been some of the happiest part of my career, is to visit with those people and show appreciation to them for what they’ve done for us. Great people,” England said.

“And now here I am, 100 years old. How long it’s gonna go, I don’t know. But I’m enjoying what I’m doing and I’m looking forward to tomorrow.”

Likewise, Gene England’s family has multiplied. He now has 108 grandchildren and great-grandchildren.

But he’s quick to credit his dad for the company’s success.

“If I were to point to one person that maybe caused this, it’s dad. He was the guy that, he was an entrepreneur. He enjoyed making a deal more than anyone I ever knew, and he put that spirit into Bill and I.”

“And of course I, when I was out there in the service and I was able to raise money, get enough money to get started, I was determined that we were gonna do it, and there was never a consideration, ‘Can we make it or not make it? Are we gonna get it done or not?’ It was a determination, ‘We’re gonna do it.’”

His brother and dad had the same frame of mind. “Hopefully all those Englands have got the same blood in them.”

C.R. England was one of the first companies that started long-haul, cross-country trucking with “72-hour service,” during which the drivers would run from Utah to Chicago on two-lane highways. “So to get there in 72 hours, it was diligent, diligent work. But it was fun all the way.”

England says traveling through the beauty of America has been another highlight of his career.

“As you leave the East Coast and head west, you come out of that beautiful green country back there, and then you come through Ohio and Indiana. People that have acre-and-a-half yards, and they’ve all got a little lawnmower to mow that lawn. And I can’t believe that they’ll mow an acre and a half of it. They like big yards.”

“And then when you hit Nebraska. Corn, corn, beautiful rows. Forever. And then Wyoming. Beautiful in the summer, and a horrible place in the winter.”

When C.R. England drivers make it a million miles without an accident, their photos are placed on a wall in the company headquarters as part of the “Gene England Million Mile Club.”

When asked how many miles he’s driven, England says, “I don’t want to brag.”

“I just drove every chance I got.”

In the halls of the headquarters, truck-drivers-in-training — recognizing him — light up and line up to shake his hand.

“So you’re hoping to get on that road?” England asked. “I’ll say how important safety is to you and me both. There’s a lot of hazards out there, and we need to have you thinking all the time and driving all the time. If you’re in the cab driving, don’t do anything else.”

He told a story about a driver crashing off the road while trying to retrieve a dropped cigarette. “He was embarrassed!” England said, which was met with laughter. “Don’t let it happen to you. Be careful. Love ya.”

England doesn’t like to stay away from the office for long. His three youngest sons are semi-retired, he says, but he goes into work every day with them. When the sons are traveling, though, he’ll have one of his friends, “old guys like me,” bring him into the office.

When asked if he has plans to retire, England says without hesitation, “No.”